Warning: include(/home/content/m/i/g/miguel164777/html/domains/mobiledevtuts/wp-content/plugins/wp-super-cache/wp-cache-base.php): failed to open stream: No such file or directory in /home/content/91/14014491/html/domains/mobiledevtuts/wp-content/plugins/wp-super-cache/wp-cache.php on line 53

The battery API is quite impressive, between other things not only can you get a battery’s voltage but you can also get the temperature, status and even an icon representing the current state of the battery.

In this post we’ll make an app that display’s all of the device’s battery information in a text view whenever there is a change of state in the battery.

This is how the app will look. 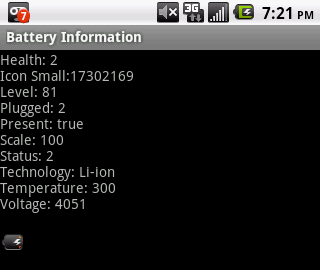 the result: an app showing the device's battery information

In order to receive the updated information from the battery we need to register a broadcast receiver and an intent filter. An intent filter tells the native battery app that our app is listening for its changes.

This is how we register a receiver with an intent filter:

In the code above the receiver is an object we are going to make called batteryInfoReceiver, the intent filter is listening for the action battery changed.

Our receiver object is the following:

If you look at the battery manager api yo see that it has many constants that start with the word EXTRA_, these extras is the data we are able to get from the battery and also the type (int, String etc).

We can easily display the data in the views, the icon_small variable holds a resource id with the battery’s image:

This is the full Java code.

No special permissions are needed in the manifest file.